How to Cure Gout

Gout, What is it?

The Gout: definition and treatments. What is Gout. Treatment, Symptoms, Causes

"The gout is a common disease in men, due to an excess of uric acid in the blood. The uric acid crystallization usually causes intense joint pain in the toe of the foot.

The gout was a very common disease 60 years ago, or even less. Treatments have so evolved that we feel the gout no longer exists. This is not the case. Gout is a painful, debilitating and highly unfair: it touches the toe of overwhelmingly men (but not exclusively). The gout was the disease of the Kings"

What is Gout? About gout...

Gout symptoms are usually a painful inflammation of a joint, it's a rheumatoid arthritis. Most of the time, it's the toe of the foot the only articulation affected. The joint is red and swollen. The pain is sudden and intense. The skin that covers the inflamed area is stretched, shiny and hypersensitive to the touch; If it's the big toe that is affected, the leg support is often impossible. More rarely, the gout pain may be located in the knees, ankles, wrists or fingers and create bumps under the skin.

Gout: Who are affected?

Typically, gout patients are about 95% men, 5% women.
• Approximately 5 million people in the United States suffer from attacks of gout.
• Gout is 9 times more common in men than in women
• It predominantly attacks males after puberty, with a peak age of 75. In women, gout attacks
usually occur after menopause.

Joint pain, mainly located in the toe of the foot, and sometimes in the joints of the legs and arms. General ill feeling, with fever, or chills. But you could also be experiencing gout symptoms and you will not have any idea. [+] see all gout symptoms

Gout cause: what cause gout

This gout pain is the result of an excess of uric acid in your blood. When its concentration is too high, it forms crystals that are located inside your joints and cause intense pain.

Why do I have an excess of uric acid?

Several causes may explain this excess of uric acid.

Risk Factors for Gout: Have some people more risk than others?

Yes. Most affected people are men (9 cases out of 10) between 30 and 50 years. This imbalance is explained by the level of uric acid in blood normally higher in men than in women. However, the onset of gout is possible in women from menopause (60 years old) and sometimes during pregnancy, we have to be so careful. Heredity also seems to be involved. A genetic or family predisposition (18% of the cases) would be at the origin of this metabolic disorder.
Age is also a factor predisposing: the kidneys are less effective and eliminate less well the waste of the body. This promotes the elevation of uric acid in the blood.
Gout affects essentially developed countries. It was called "the Royal disease", because it's due to a diet too rich, as that of the Kings.

What is the evolution of the gout?

In general, the frequency and numbers of gout pain increased with time.
After several years, in addition to joint pain, the disease may cause deposits of crystals under the skin called tophi. They are friable whitish or yellowish masses located on the outside edge of the ear, on the elbows or near the elbows, on fingers, on toes or close to the Achilles tendon. If these tophi is deposited in bone structures then we talk about gouty arthritis. Joints are gradually destroyed, and this is especially characteristic in the hands, wrists, feet...
Crystals may also settle in the kidneys. In the absence of treatment, they will interfere with their functioning and ultimately lead to renal failure.

Is there a relationship between gout and kidney stones?

Yes. An excess of uric acid in your body can cause the formation of kidney stones. The formation of these stones in your kidneys can then cause renal colic that result in severe kidney pain (in the back, below the ribs).

Discover the main symptoms of gout on the body: fever, joint swelling, pain, and more.

Discover the symptoms of gout

Discover surprising photos of the gout toe of the foot and other deformations: ear, hand, feet...

Discover the gout toe of the foot

Discover a selection of the best treatments for gout: paracetamol, colchicine, etc...

Discover the treatments of gout

Substance that is the cause of gout (if rate greater than 0,08 g/l), which is derived from the degradation of purines...

Substance located in food (beer, anchovies, etc) which in excess cause gout. They help our DNA...

Clusters of uric acid crystals that cause deformation on the joints and the under the skin... 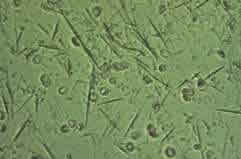 Allopurinol: A medical drug that is used to lower the levels of uric acid in the blood.

Drugs for gout: a medical drug that decreases the inflammation caused by gout.

Gouty arthropathy: Destruction of the joints due to tophus (cluster of uric acid crystals).

Renal colic: very intense lower back pain due to "stones" that close up the urinary tract.

Hypouricemia: medical treatment to reduce the level of uric acid in the body.

Infiltration: injection of a product directly into a joint.